Salamander has two operated blocks in the North of the basin with extensive 3D seismic coverage. Over 25 leads and prospects have been generated from this data. In 2010 Salamander made the play-opening Angklung discovery that flowed 26 MMscfd from good quality Pliocene aged channel sandstones.

This was followed by a three well programme in 1H 2013 that resulted in the South Kecapi oil discovery and North Kendang gas discovery.

A follow up on North Kendang is scheduled before end 1H 2014 with the majority of the cost being covered by an insurance claim relating to the North Kendang-1 well (see here for more details).

The term “North Kutei” refers to Salamander’s operated Bontang and SE Sangatta PSC’s located in the offshore Kutei Basin, East Kalimantan, Indonesia. This basin is one of the world’s major hydrocarbon provinces with an estimated original recoverable reserve of 40 Tcf of gas and 3 Billion barrels of oil.

There are two major source intervals that have been identified in the North Kutei Basin:

The latter organic material is also responsible for providing a potential biogenic gas charge, evidence for which includes, at shallow depths, numerous DHIs and BSR’s.

Late Pliocene age shales form the ultimate lateral and top seals for the proven Pliocene reservoir targets (BT15 and younger). Deeper in the section, intraformational shales of Miocene to Pliocene age (BT45-BT50) are inferred to be the major sealing formations for the deeper Miocene and older oil plays.

A major shale interval deposited in the Oligocene to Early Miocene provides a regional seal for the oldest play the Early to Mid-Eocene half graben sands developed along the Mangkalihat Ridge southern margins.

A range of structural, stratigraphic and structural/stratigraphic traps have been mapped. In general the Pliocene sands have a stratigraphic element to them even if as in Angklung-1, there is fault dependant closure in one direction. There are also a number of carbonate reef plays in the region, although not imaged on the 3D.

The basin floor deep water fans of Miocene age have good stratigraphic trapping potential, however in the deeper plays the seismic imaging is less able to discern subtle changes in lithology and fluid, and hence these plays will only be recognised from detailed sequence stratigraphic mapping. Structural plays exist mainly from toe thrust anticlines and shallow angle sub-thrust plays.

The primary trapping style of the mapped prospects and leads is a combination structural/stratigraphic trap, and there is some stratigraphic element to virtually all the plays within the acreage. 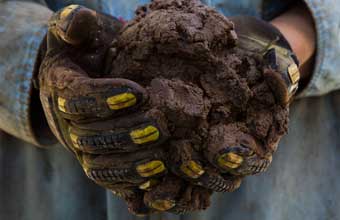 The Group has drilled four exploration wells to date in the North Kutei basin. Pre-2010 when Salamander made the Angklung gas discovery the prevailing wisdom was that the North Kutei was sand starved meaning there would be a lack of effective reservoir.

In 2010, the Angklung discovery found 23 metres of reservoir quality, gas bearing sandstones that flowed 26 mscfd of gas. The Angklung well proved the existence of effective sandstone reservoirs in the North of the basin.

Having completed extensive technical work on the back of the Angklung well over 60 leads and prospects were mapped across the Bontang and SE Sangatta PSCs. In 4Q 2012, Salamander returned to the North Kutei for a three well exploration campaign.

SOUTH KECAPI & BEDUG
The first well was completed on the South Kecapi prospect. This well encountered numerous shallow gas bearing sandstone reservoirs before encountering an oil bearing sandstone (the “BT45”) in the lower Pliocene. This flowed oil at a constrained rate of 6,000 bpd during testing.

Later in the programme the rig returned to follow up the South Kecapi oil discovery with a well on the Bedug prospect. South Kecapi sits on the flank of the Bedug structure which is a large anticline some 4 km updip from South Kecapi.

The BT45 sandstones clearly pinch out somewhere on the flank of the Bedug structure and there is a distinct possibility that they could contain a commercial oil discovery (c. 40 MMbbls is the commercial threshold). An appraisal well is warranted and the technical team are completing a post well review of the acreage and we will look to bring in a partner ahead of any appraisal drilling.

The North Kendang well was suspended following a significant wet gas kick encountered a few metres into the prognosed Upper Miocene target section that lead to an elevation of wellbore pressure up to 3,800 psi. The well was brought under control but it was decided that it would not be safe to drill through the Upper Miocene section without using Managed Pressure Drilling equipment.

From the drilling pressure data acquired, and the sampling of wet-gas during well control operations, there are good indications of the potential for a large hydrocarbon column at the level of the kick zone.

The Group has insurance against such well control incidents that covers the cost of a re-drill to the point where the well was suspended. It is anticipated we will return to re-drill a well on the North Kendang prospect before the end of 1H 2014.