Greater Kerendan refers to the acreage position in Central Kalimantan, Indonesia, that is centred round the development of the Kerendan gas field.  Salamander has a 70% operated interest in the Kerendan field which contains 120 Bcf of 2P reserves and a further 160 Bcf of contingent resource.

A gas sales agreement has been signed with PLN to supply 20 MMscfd to a new build power plant 3km from the field.  Four development wells were completed in 1H 2013 and tested at a combined rate of 40 MMscfd which is comfortably in excess of requirement under the GSA.

The power plant will be able to handle three times the currently contracted volumes providing an opportunity to commercialise additional gas volumes currently in the contingent resource category, at an improved gas price.

The West Kerendan-1 well was completed in 1H 2014 as a gas discovery and flowed at a rate of over 50 MMscfd. West Kerendan has certified contingent resource of 313 Bcf with a further 50 Bcf of upside from a second gas column.

There is follow on exploration potential in Greater Kerendan with numerous prospects in both the Upper Berai and Tanjung formations.

The Bangkanai PSC is located on the western side of the Kutei Basin onshore Kalimantan, north of the Barito Shelf. North of the Teweh High is the Kerendan depression, a large area with over 12,000 ft of sedimentary strata where a large part of the Bangkanai PSC is located. The Kerendan gas discovery is situated on the northwest flank of this depression.

Four major phases of sedimentation are recognised in the northwest part of the Kutei Basin: Early to Middle Eocene; Late Eocene to Early Oligocene; Late Oligocene; and Miocene.

Each of these phases is separated by a major change in sedimentation regime, tectonic event or palaeo-geography.

Upper Oligocene platform carbonates (Berai Formation) occur extensively on the Barito shelf in southeastern Kalimantan and are flanked northward by coeval slope and basinal deposits (Bongan Formation) which accumulated in the southwestern part of the Kutei Basin. The distribution of these facies is fairly well constrained by the study of outcrops, wells and seismic profiles. The Berai Formation consists of diverse limestone types with a wide range of textures and with dominant skeletal components of large foraminifera, red algae and corals.

The carbonate build-ups generally occur as isolated bedded mounds, from a few feet up to 1000 ft in thickness. The preservation of primary porosity is generally poor due to diagenetic processes during burial history, particularly the infilling of pores by non-ferroan calcite cement. The development of secondary porosity is limited, due to the retardation of subsurface fluid flow by non-permeable layers, and the absence of solution effects due to sub-aerial exposure and karstification. Preserved porosities are mainly present as vugs, best developed in coarse-grained shelf-margin facies, which may not have subsequently been completely filled by calcite cement.

Migration timing is most likely to have been post Miocene uplift, with short migration distances from local sources. Current mapping shows that the Kerendan Field comprises an anticlinal structure coincident with a reefal facies carbonate buildup. Stratigraphic trapping may be possible where the reef rim grades to tight lagoonal facies. 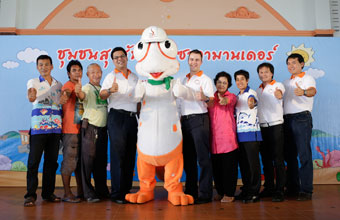 The Kerendan gas field contains gross 2P reserves of 120 Bcf of gas and 1.8 MMbbls of condensate. The field also contains a further 160 Bcf of contingent resource that can be converted to reserves once a Gas Sales Agreement ("GSA") has been signed.. There is an additonal 313 Bcf of contingent resource in West Kerendan that was discovered in 1H 2014.

The Kerendan gas field contains c. 280 Bcf of resources. Of this, 120 Bcf has been sold under a gas sales agreement (“GSA”) with PLN, the Indonesian state power company.  Under the terms of the GSA, PLN will be supplied with 20 MMscfd for 20 years. The gas will be used as feedstock at a new power plant that is being constructed 3 km from the field and production is expected to commence in 2H 2014.

Development drilling on the field was completed in 1H 2013. Four wells were drilled and tested at a combined rate of 40 MMscfd, a flow rate comfortably in excess of the 20 MMscfd required to meet the terms of the existing GSA.

There remains up to 160 Bcf of gas in the Kerendan field that is as yet uncommercialised.  The most immediate opportunity to commercialise additional volumes of gas would be through selling further volumes to PLN for use at the power plant, which will be able to process over three times the volume sold in the existing GSA.

The West Kerendan discovery made in 1H 2014 has added a further 313 Bcf to contingent resource volumes with the power plant providing the obvious route to monetisation with the potential to supply a total of 70 MMscfd.

Near term exploration activity in the Greater Kerendan area is focused on the Bangkanai PSC.

The West Kerendan-1 ("WK-1")exploration well was completed in 1H 2014 and discovered over 300 Bcf of gas in the Oligocene Upper Berai formation and encountered gas bearing sandstones in the Eocene Tanjung formation.

There are numerous other Upper Berai prospects in Salamander's acreage in the Kerendan area that have been de-risked following the West Kerendan discovery and will be part of the next wave of exploration drilling. There is also evidence of prospects with a thicker sequence of Tanjung sandstones than was encountered at the WK-1 location and testing one of these prospects will also form part of a follow up drilling programme.

A discovery of over 500 Bcf would justify the construction of a pipeline to open access to the gas market on the East Kalimantan coast, around the Bontang LNG plant.  The gas price here is around $2 per mcf higher than in the Kerendan region.

During 2013 we signed two new PSCs, West Bangkanai and North East Bangkanai, providing Salamander with a dominant acreage position within the Barito basin.